A new Insecticide targeting Wasps only

We've all had the experience of ants over-running the kitchen. So you get out the trusty ant bait, the ants carry it back to their nest, and the queen and all the others die.

Well, now there is a wasp bait that does the same - Vespex.

Our surplus boxes are all coming back to the ranch to be cleaned up and re-dipped in oil and then stored for the winter. There is a huge pile stacked up waiting for attention. And boy, do the wasps just love that. All that wax and residue of honey!

So we put out some vespex traps.

And the wasps were immediately into it. 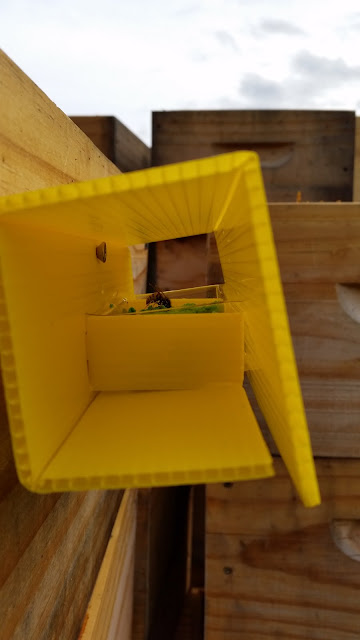 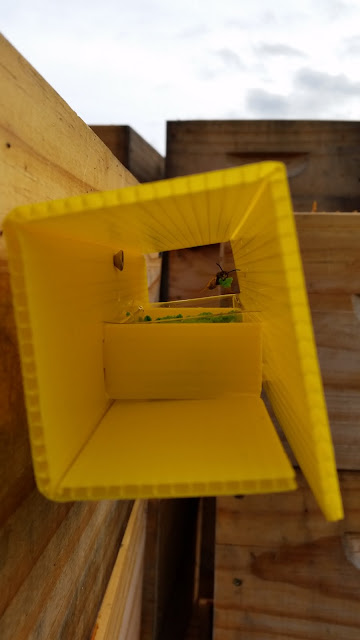 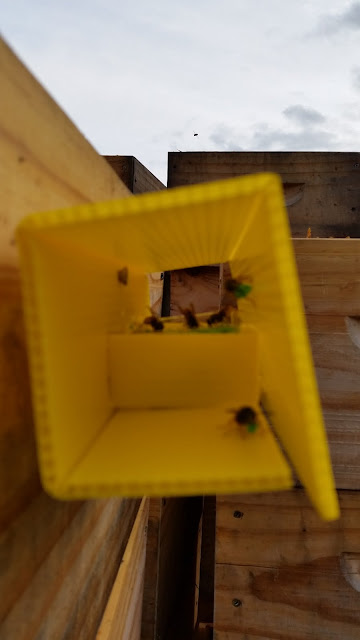 It looked like they were picking up more than their body weight to take back to their nest.

The next day the traps were not entirely empty, but definitely a bit light on the poison,

Note: to be able to get Vespex you need to complete special Vespex training and be registered as an approved user.

How to tell if a weed killer is toxic to bees

Google is a great thing, but also those 2 hours you spend researching something, you never get back, right? I've done quite a bit of research into specific weed killers for our hosts, and thought I would share the better websites that I have found on the way.

Caveat: there isn't AN answer. You can believe what the manufacturers say, or the 'never ever use weedkillers' crowd, or the 'only true if it has been proven by science' crowd - the problem with this last one is that there hasn't to date been a lot of research around all this, bees just got on and did their thing and nobody worried. But now with big problems with Colony Collapse Disorder, especially in the states, more attention is being given to this issue. But any good science takes years, and even then might not produce a definitive answer.

That being said, here is what I came up with:

Say you are going to investigate Conquest.

Its supplied by Nufarm, so if you google it you get the Brochure. Doesn't say what is in it though.

What you want is the label 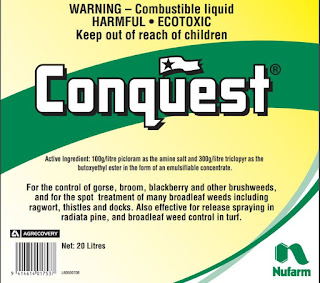 which lists the active ingredients

picloram and triclopyr in this case.

So let's take Triclopyr - as the butoxyethyl ester:

(picloram, by the way, was used to make Agent White, and enhanced Agent Orange during the Vietnam War - just saying!)

So on Wikipedia, doesn't say much except that it is "chemically very similar to the herbicide which it generally replaces, 2,4,5-T, which was phased out in the U.S. in the 1970s amid toxicity concerns".

Toxipedia doesn't say much about bees and triclopyr. Although Toxipedia can be quite useful for some chemicals, just not this one. (and Picloram doesn't even get a listing - depends what weed killer you are using as to what information is around).

And then Pesticideinfo which has a whole bunch of science-y information (which both my mother and brother, being chemists, would get all excited about, but the rest of us...not so much).

But down in the Terrestrial Ecotoxicity it does mention bees.

Which might be too tiny to read on this blog, but what it says is it is 'slightly toxic to bees'. And that
"Population-level effects on honeybees may occur even if a pesticide has low acute toxicity. For example, certain pesticides interfere with honeybee reproduction, ability to navigate, or temperature regulation, any of which can have an effect on long-term survival of honeybee colonies. The neonicotinoids, pyrethroids and keto-enol pesticides are some types of pesticides causing one or more of these effects".

So all up, doesn't look dire. Not great either. And I think I would take the bees away before spraying this around. And wait at least the half-life time before bringing the bees back, probably twice the half-life time - which in this case is 39 days see here. So quite a while. (the half life is the time it takes for half the product to be gone, in the soil in this case).


There is a major class of pesticides  - Neonicotinoids - that is known to kill bees. This is a HUGE problem in the United States, where last year beekeepers lost 42% of honey bee colonies, and neonicotinoids are thought to play an important part in that loss.

One pest control company in the states Ortho, has just announced that they are going to "immediately transition away from the use of neonicotinoid-based pesticides".

And Wikipedia states that "The neonicotinoid family includes acetamiprid, clothianidin, imidacloprid, nitenpyram, nithiazine, thiacloprid and thiamethoxam. Imidacloprid is the most widely used insecticide in the world."


We do have our own rules governing the use of neonicotinoids, from the EPA, read about them here. But they basically say you're not to spray near beehives or on flowering plants. So they haven't been banned at all.

Neonicotinoids are used to coat some seeds, and these are still sold in NZ.

Also "They are sold here under the common trade names of Cruiser, Gaucho and Poncho, the active neonicotinoid ingredients of which are thiamethoxam, imidacloprid and clothianidin respectively. Gaucho is also used on potatoes, winter squash and pumpkins."


Why neonicotinoids are bad for bees

There has been much talk about this group of insecticides globally.  There are now bans and trial bans in place in many areas around the world.  This is not so in New Zealand, so we need to keep a particular eye out for the ingredients we spray in our gardens and on our farms.  Neonicotinoids work as an insecticide by blocking specific neural pathways in insects’ central nervous systems.  At ‘sub-lethal doses’ the chemicals impair bees’ communication, homing and foraging ability, flight activity, ability to discriminate by smell, learning, and immune systems – all of which have an impact on bees' ability to survive.  Neonicotinoid pesticides have been linked to the dramatic collapse in bee numbers over the last decade.
Domestic Sprays that contain neonicotinoids - Many domestic gardening products on sale in hardware stores and garden centers contain these chemicals.  If you're buying any kind of pest control check the ingredients – anything that contains acetamiprid, imidacloprid, thiacloprid or thiamethoxam should be avoided to maximise bee health.
While the topic of bee safe sprays is relevant topic it is also one that can also be rather confusing. There are so many different garden sprays available in the market place and so many different chemical names, brand names and generic names that making a considered choice can seem impossible. We have tried to simply the issue below by providing some brand names commonly available in the New Zealand market place.
So if you are at all interested in the survival of honey bees, please DO NOT USE any of these toxic chemicals.

Others are bad too, although not as dire, and in the next post I'll outline how I research these things properly and how you can find out what ingredients are suspect, rather than just relying on the supplier saying it is "not toxic to bees".

What to use in a bee smoker

We normally use chopped up coffee sacks in the smokers as they make a good smokey smolder.

Sometimes they are hard to get, so recently we got a big pile of them, left over from a wedding where they were covering hay bales as the seating arrangement for a country-style event.

A couple fell off the back of the truck ;-) and have been re-purposed as cat beds. Quite popular, they are too. The dog loves hers too. 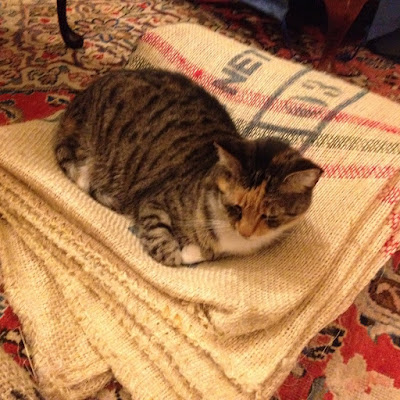 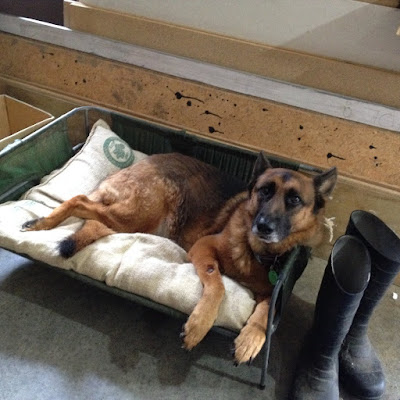 How to Kill a Wasp Nest

Oh the weekend we went and dealt to a wasp nest. It was up in the roof space of a shed on one of our host's properties. The wasps had crawled in through the gap between the roofing and the wall cladding. Looked like there were a whole heap of them too, they were quite busy coming and going. 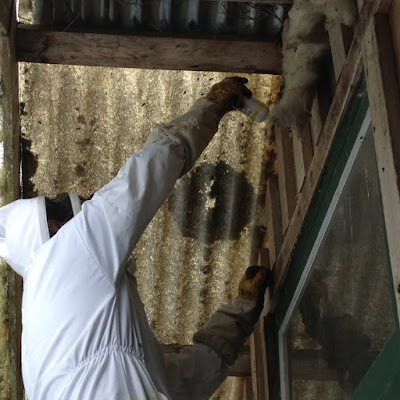 Intrepid beeman put his head right up in the flight path and gave them a few good puffs (or maybe half a bottle?) of dust2dust, which is a permethrin based powder (note: this is not a sponsored post!).

We could hear the wasps starting to hit the tin roof next door in just a couple of minutes, as they conked out, so it worked pretty quickly.

Then we went inside and had a cuppa and a yarn - my favourite part of these bee visits.

After a bit, we could see that the steady flow out of wasps from the nest had slowed to possibly nothing, the ones coming in were still a steady stream.

The plan is to go back in a week or 2 to check if they are all dead, may be give them another puff or 2 to finish them off.

Its not great killing things, but it not-greater having wasps killing your bees.

Tutin levels are high this year

This year higher levels than normal of tutin are being detected, especially on the east coast of the North Island of NZ.

Watch this video from the Bee Products Standards Council for a good description of tutu.

The short answer is, DON'T EAT COMB HONEY unless you have had your honey tested, and be really careful eating extracted honey that has been blended. If you are selling honey you are legally required to get your honey tested for tutin.

I also wrote about this in this blog post.

Varroa Free Bees to save the world 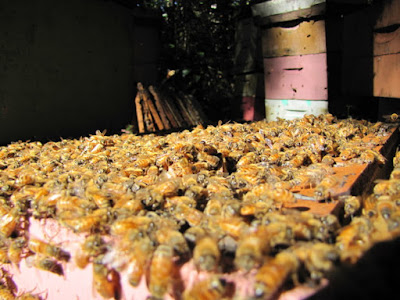 Our world's food supplies rely heavily on bees for pollination. But they are increasingly under attack from various causes, creating colony collapse disorder. But here is good news of an amazing dude who has been working hard on bees in Niue since 1999. That's 16 years, so patience is often required when working with nature, as this guy must know.
Check out the article Creating a Global Bee Sanctuary . And for more information see their fund raising page.