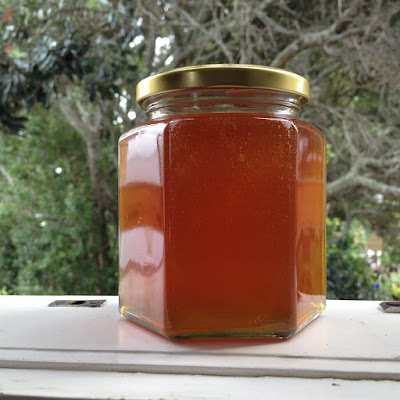 MPI (Ministry of Primary Industries) is re-jigging the definition of manuka honey.

Word on the street is that there will be a 'discussion document' released in April 2017, and the final documentation will become law in June or July 2017.


But that doesn't tell us much.

The problem that MPI are trying to solve is how do you tell manuka honey from other honey, what is just 'nearly manuka' rather than full blown manuka, and how do you detect (and stop) honey fraud. Oh, that's 3 problems. There's probably a few other permutations too. So you see the problem.

This is A HARD problem.

And...they need a test, or tests, that are easy to do anywhere. So if you have some honey land at say Fortnam and Masons, they might want to verify that it is the real deal.

Add to that, there have been several different versions of measuring manuka-ness of honey.

There are several factors that are measured with manuka honey:

MGO is methyl glyoxal, which is a long lasting antibacterial enzyme, that's not known to occur in any other honey in the world.

UMF is Unique Manuka Factor. Overseen by the UMF Honey Association www.umf.org.nz. UMF factor is a measure of leptosperin, DHA and MGO.

(don't you love all these 3 letter words?)

DHA is dihydroxyacetone. Which is present in the nectar of manuka flowers. Manuka honey starts out with high DHA and low MGO. Over time DHA in the honey interacts with various naturally-occurring proteins and amino acids and creates MGO. So manuka honey matures, and reaches peak maturity at about 18 months age.

This is Non-Peroxide Activity of honey. A bit similar to UMF. But not quite. Check out Apiculture NZ's take on it. And if you want to know what non-peroxide activity is, have a read of this post.

To be medical grade honey, it seems (although I can't find the 'bible' on this, and I have looked heartily) it needs to be (I think) UMF 9.5+, microbe level < 500 somethings, and moisture < 20. Plus a range of tests for contaminants - these need to be below the relevant thresholds, so hygiene and straining for impurities and such comes into play. Might be other things as well.

None of these tests quite covers the fraud issue. Read here for more on manuka honey fraud.

How exactly do you tell that manuka honey is the real deal, and not just normal honey with a few chemicals added, to mimic some of these tests?

One way is to look for leptospermum pollen markers. Another might be DNA tests. Who knows? The scientists do, I guess, I'm just making stabs in the dark here, based on the local industry gossip.

What is it going to mean for beekeepers?

The street story is that the new regulations will mean that anything labelled 'manuka honey' will need to be 10+. 10+ what is the question of course.

But, let's say equivalent to 10+ UMF, or NPA - now that is a pretty high standard.

So what does this mean to the ordinary beekeeper (OK, I know none of you are 'ordinary').

So if you are making 'only-just' manuka honey, what is your strategy going to be?


And just in case one of your strategies is 'Plant More Manuka', check out the resources available for growing and planting manuka - Free How-to for seeds, E-courses for everything to do with establishing a manuka forest.