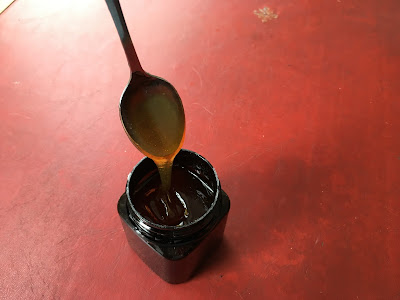 I think the answers are 'complicated', yes, and 'that is the million dollar question that MPI is trying to fix' - see last week's post on the New manuka honey regulations.

To me, simplistically, manuka honey fraud is when honey sellers, either in NZ, or (I would guess more likely) overseas, take honey that is only slightly manuka and try to pass it off as good grade manuka.

The easiest I suppose, is just to make false claims on the label. So say the honey is manuka UMF 2. Well, how about calling it UMF 8+ on the label then? Or MGO something huge. Or even NPA something large, although this is not so well known as a label. Check out the previous post for what these 3 letter words all mean.

But this is quite easy to catch, you would only need to do a test of the honey to realise it is not what it is claiming to be.

Well then, what about adding chemicals to the honey that mimic the natural honey chemicals that produce say a UMF reading of 8+? Then if a spot check was performed on the honey, it would pass muster.

Out and out crookery of course.

This one has just crossed my radar recently - what if you were to label honey technically truthfully, but still indulge in misleading advertising by implication? That's a lot greyer now isn't it?

For a bit of background, we need an understanding of honey qualities. See this post on the medicinal benefits of honey first.

So if you have been confused about how the ancient Egyptians used honey to heal (and they did) but that manuka honey has only ever existed since the Europeans brought honey bees to NZ around mid 19th century (and no, it's never been an ancient Maori remedy), then this is the answer. The healing properties of Egyptian honey came partly from hydrogen peroxide.

And you could describe the measure of hydrogen peroxide activity in honey as 'Active 10+' or whatever number it comes out to.

But the special thing with manuka honey is the MGO, also kind-of known (it gets a bit complicated science-y here) as NPA, which is ...ta dah... NON-Peroxide Activity. So to qualify for the high status, high price as manuka honey, it needs to have Non-peroxide activity. Exactly NOT plain 'active'.

So you see where we are going here - who's seen honey that is labelled as 'Active 10+' and selling for a truck load of $, but has no mention of UMF or MGO? It's probably even slightly manuka, so it can be truthfully called 'Manuka active 10+' too. Otherwise that would be false labeling wouldn't it?

But it is not anywhere near Manuka UMF 10+. Which is very good, strong manuka honey. Worth a lot of money.

And what's more, I've done a little sample with a friend in California, with the manuka honey available in her local wholefoods shop, and half the samples were just 'Active'. Only a couple were properly labeled UMF or MGO. Not all the honey was in jars with NZ brands on the front either, so probably has been packaged somewhere other than NZ. And as an aside, it all was WAY CHEAPER than any manuka honey available to me to buy here in NZ. What's up with that?

How to catch manuka honey fraud

This is, of course, the million dollar question.

The UMF association has a standard that they are trying to promote, to label manuka honey with some quality assurance. UMF stands for Unique Manuka Factor, so that should rule out pretend honey you would hope.

They are currently involved in a big public awareness campaign in the UK.

And MPI are involved in rewriting the manuka honey standards too. Which we are all awaiting with bated breath (or not) to see what this will mean to the industry, and our personal honey harvests.


Quite a tricky situation, all and all. Fingers crossed for a good outcome.